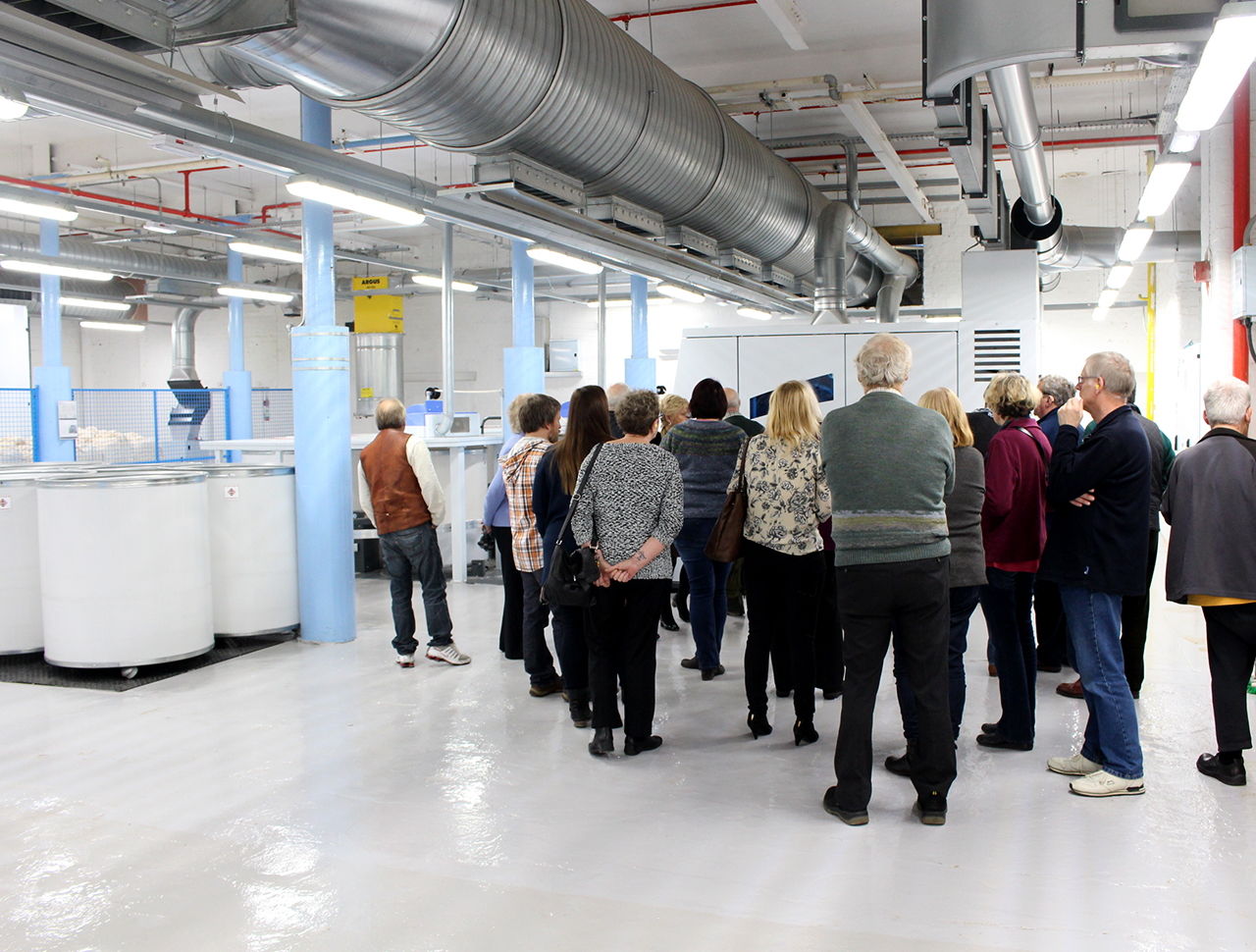 More than 120 visitors from far-and-wide and of all walks of life joined us on our recent public open days.

The guest-list included a 73-year-old who’d travelled from Portsmouth, and a former clothing manufacturer who joined us to mark his 90th birthday.

Many of our visitors had either worked in the cotton industry or had memories of their parents or grandparents going off to the mills – and all of them had fascinating stories to tell. 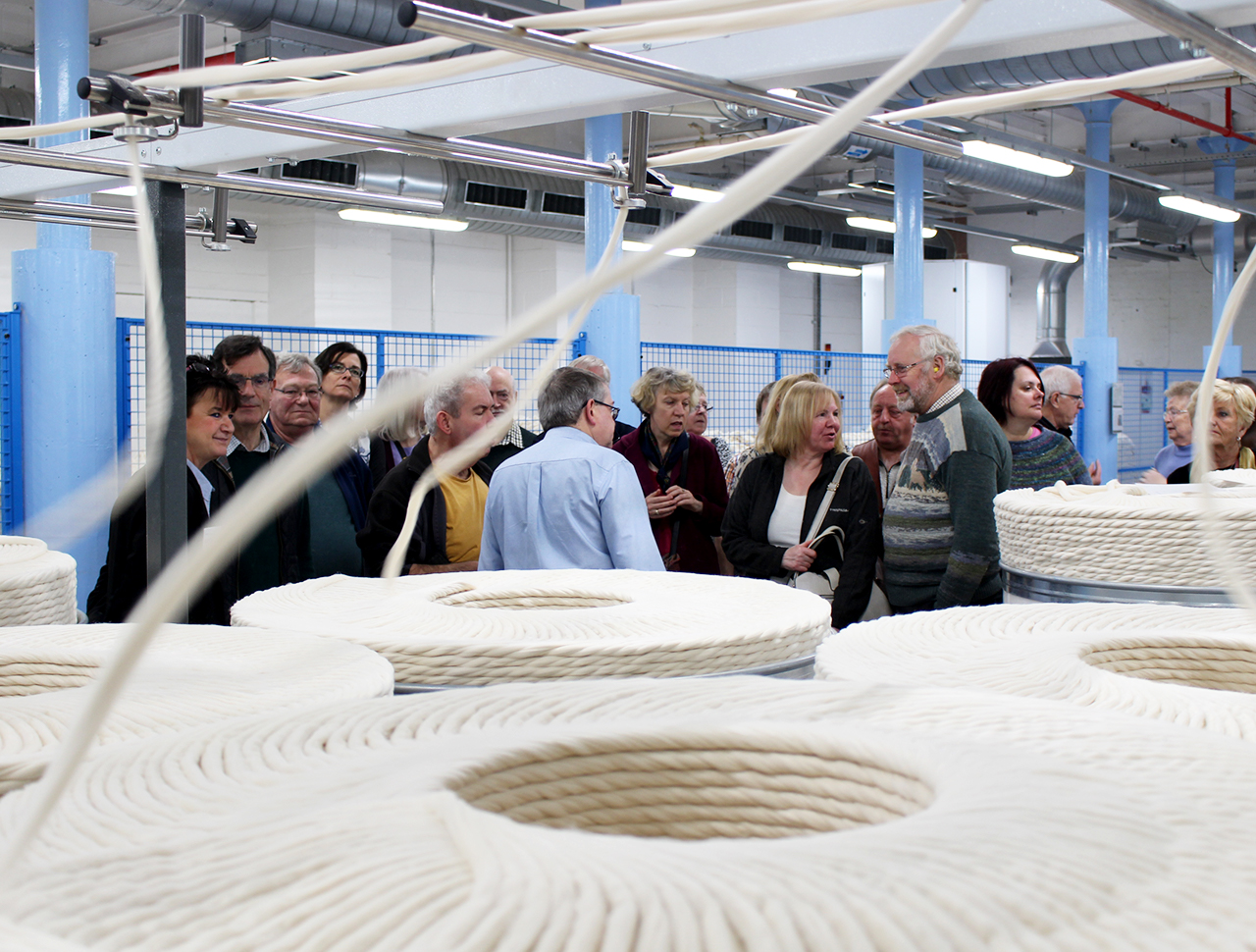 We’ve been overwhelmed by the messages of thanks and appreciation we’ve received since.

Brian Dutson, who made a 500-mile round-trip to Tower Mill in Dukinfield with his wife Ann, revealed an amazing coincidence after he was given a tour by our production manager, Paul Storah.

Brian, whose parents worked in mills around Oldham when he was growing-up, travelled the world installing cotton machinery before he retired, discovered he and Paul had worked in the same mills in South Africa.

Before heading back down south, he told us he thought our venture is ‘wonderful’ and that he’d thoroughly enjoyed reminiscing.

Fresh from celebrating his 90th birthday, Edward Taylor came with a group of friends and family, who’d all worked in the textiles industry.

Edward, who is pictured, was the proprietor of Edward Taylor Textiles Ltd, which started life as two looms in the early 50s and evolved into a garment making factory, which supplied retailers such as Harrods.

He said: “It was tough in the textiles industry even then, we were weavers but everybody started buying from China, customers kept driving down prices, and so eventually, even though we didn’t want to, we had to buy from abroad too. In the end, we sold the looms.

“Today has been fantastic, very, very good to see. The cleanliness of it all struck me – mills didn’t used to look like this.”

Gay, of the Thameside Heritage Forum (pictured above) said: “We’re nosy, we couldn’t miss an opportunity to visit! So much of our local history is involved in mills and the textiles industry. I’ve had a really enjoyable day, the scale of it is very impressive.”

Gay’s fellow forum member, Rita Vaughan, told us that her grandmother once worked at Tower Mill.

“It was obviously very different then!” she said.

One of the most heart-warming things from the open days was hearing from people who never lost faith in British manufacturing.

Maria Poyner, 87, was a weaver in Stalybridge in the 70s, and she attended with her daughter, Angela Buckley.

Angela, who’s late-father was a cotton spinner, said: “It (the visit) meant so much to my mum. She’s always said spinning and weaving would return to the North West in her lifetime.”

Joanna and Raymond Gammidge used to run a factory that made 10,000 fabric seats for McLaren buggies a week. The pair also performed in Manchester’s jazz clubs at the same time.

Joanna said: “People said the textiles industry was dead, but I always knew it would come back. These things are cyclical.

“I made my own dresses for my shows and I’ve still got some that are more than 30 years old. But we became a throw-away society and everything is now so cheap and disposable. This just shows that people are starting to want quality again.

“It has been wonderful to see, I really hope it succeeds and I am sure it will.”